The right tool for the job...

Another issue I found while test driving the '40 was that it overheated.  These motors do not run that hot, and the radiator is larger that some other 235 setups that I have seen.

I never liked how the thermostat housing was.  The thermostat was higher that the radiator cap.  With this setup, there is no way that I could get all of the air out of the system.  I figured that it needed to be changed as it might be contributing to my overheating....

After a bit of measuring, I came up with this.


This provided me the opportunity to play with a new high helix endmill...
This thing is awesome...I was taking 0.75" depth of cut, 0.125" step over at 60 inch per minute.  The machine didn't even complain a bit.
I like aluminum....
Posted by Dave at Vintage Metalworks at 9:49 PM

Nothing like the feel of a good brake pedal...

I took the '40 out for a drive about a week ago.  I knew the brakes were not that great but I figured that they would stop me.  While not completely safe, I figured that they were at least "car guy safe".  Luckily, nothing bad happened as I gave myself plenty of room to stop, but it seemed that the more I drove it, the worst they became.
Being that the drums, shoes and wheel cylinders are all '40 ford, I figured that they just needed to be adjusted.  However when I jacked the truck up to inspect, everything appeared fine.  I went ahead and bled them anyway.  The rears seemed fine as I was getting no air and plenty of pressure.  The fronts were another story.  I could hardly get any pressure out of them.  My friend that was helping me suggested that maybe we should switch the lines on the master cylinder.  His thoughts were that some dual reservoir master cylinders are biased front to rear.
It did make a difference as I was able to get good pressure out of the front bleeder screws.  But the pedal still sucked...bad.  So, off to google to search for some answers....
The master that I was using is a '68 Chevy Impala with four wheel drum brakes.  I have used this on other cars with similar set-ups with marginally better results.  I always attributed the less than stellar pedal to the '40-'48 Ford era brakes.  Anyway, a picture of the master is below...
Looking at reproduction '40 ford brake parts, I noticed that the original single pot master was an 1 1/16"  bore.  According to Autozone's website, the master cylinder I was using was a 1" bore.  Could a 1/16 of an  inch make that big of a difference?  Certainly not...right?  Well, since I am a mechanical engineer, I figured I could do some calculations.  I simplified the problem a bit by assuming that there was only one wheel cylinder acting in one direction.  I also assumed that an average person can apply 100lbs of force on the brake pedal.  That might be high, but again I was only looking at relative differences.
When the bore size of the master increases, the line pressure goes down given that you are applying the same pedal force.  P=F/A  Simply stuff, huh?  However, the volume of fluid moved increases by the square of radius of the piston.  What this means is that by increasing the diameter of the piston, you lose a little pressure (or essentially shoe force on the drum) but you gain quite a bit of fluid volume that is moved throughout the system.
With these old ford non-self energizing brakes, when the pedal is released, the springs pull the shoes back to the same pre-defined stop.....regardless of wear.  So, in order for these brakes to work effectively, they need a lot of fluid movement and they need to be adjusted regularly.
So, I determined that I needed a a larger diameter master cylinder.  After searching on the 'zone's site for awhile, I found that a '68 Impala with disc/drum setup has a 1 1/8" master cylinder.  Below is a picture of it.
A misconception I always have was that a disc/drum master had different diameter pistons.  Not on this one.  The first thing I did when I got home was to take it apart.  Both were the same size, but it did look like there was a bias between the front and rear.

So, I hooked the front brakes to the large pot and the rears to the little pot and presto...I finally have an awesome pedal.  So exciting!
Posted by Dave at Vintage Metalworks at 9:33 PM

The first two waterjet pieces for my 235/261 adapters showed up the other day.﻿  Now onto some machining... 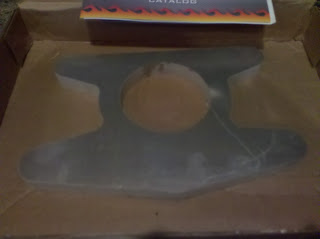 Scott at Neil & Parks Racing cut them for me.  Quick turn around, nice people and good prices, can't beat it.
Posted by Dave at Vintage Metalworks at 12:36 PM

Well, I haven't got much done in the shop recently.  I had to make a trip to Bakersfield  for my day job last week.  There was some time to kill Friday morning, so we hopped in the rental and made the 2 hour drive to El Mirage. 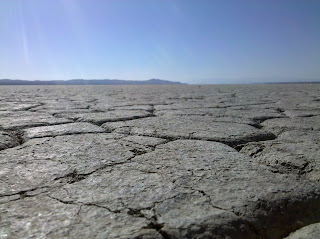 Since nothing was happening there, we decided to head back until we passed Willow Springs. 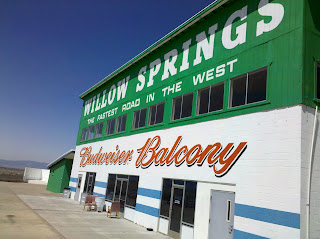 And this was running.... 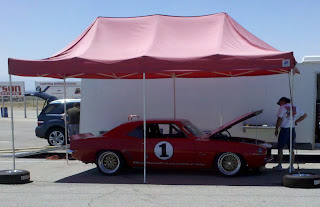 
I will have some shop stuff to post soon.....I promise

﻿
Posted by Dave at Vintage Metalworks at 9:59 AM