Though not must excitment has been happening here on the blog, things have definetley been busy in the shop.

These are some spacers for Rochester 2G carburetors. I like the quick and easy projects.... 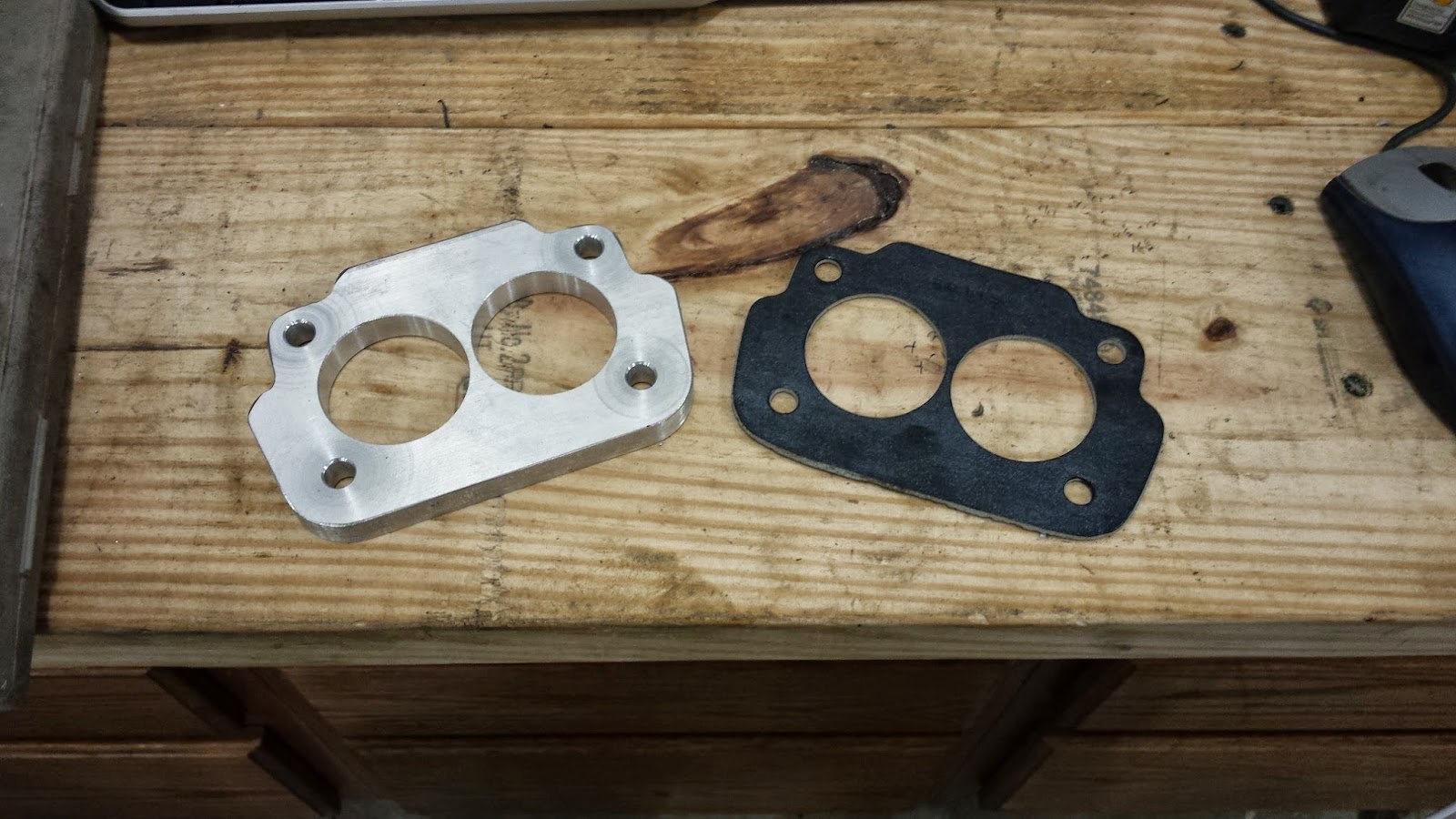 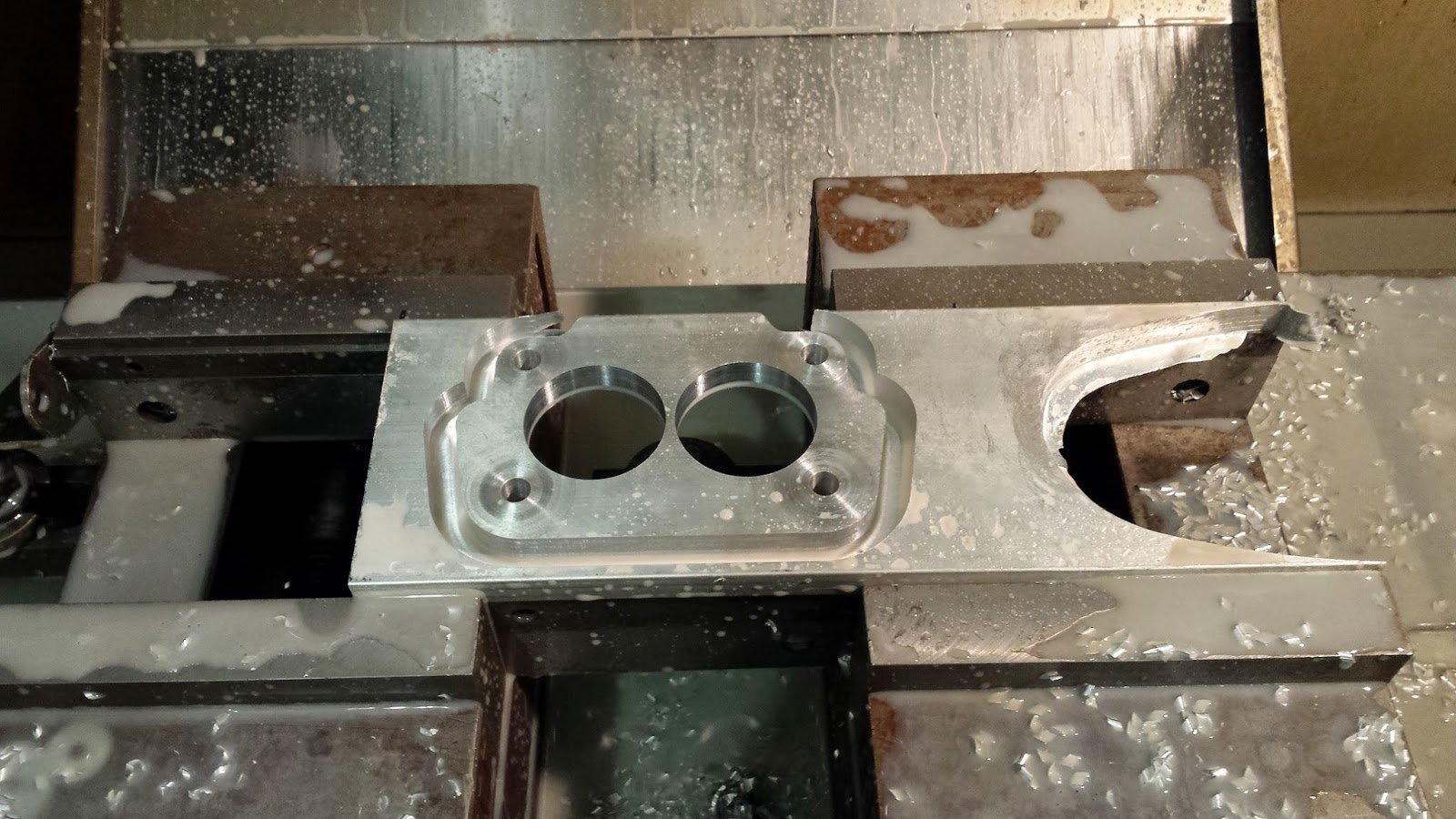 Posted by Dave at Vintage Metalworks at 7:13 AM

Took a little time off last weekend and was able to make it to the Dover power show.  Steam power is absolutely fascinating.... 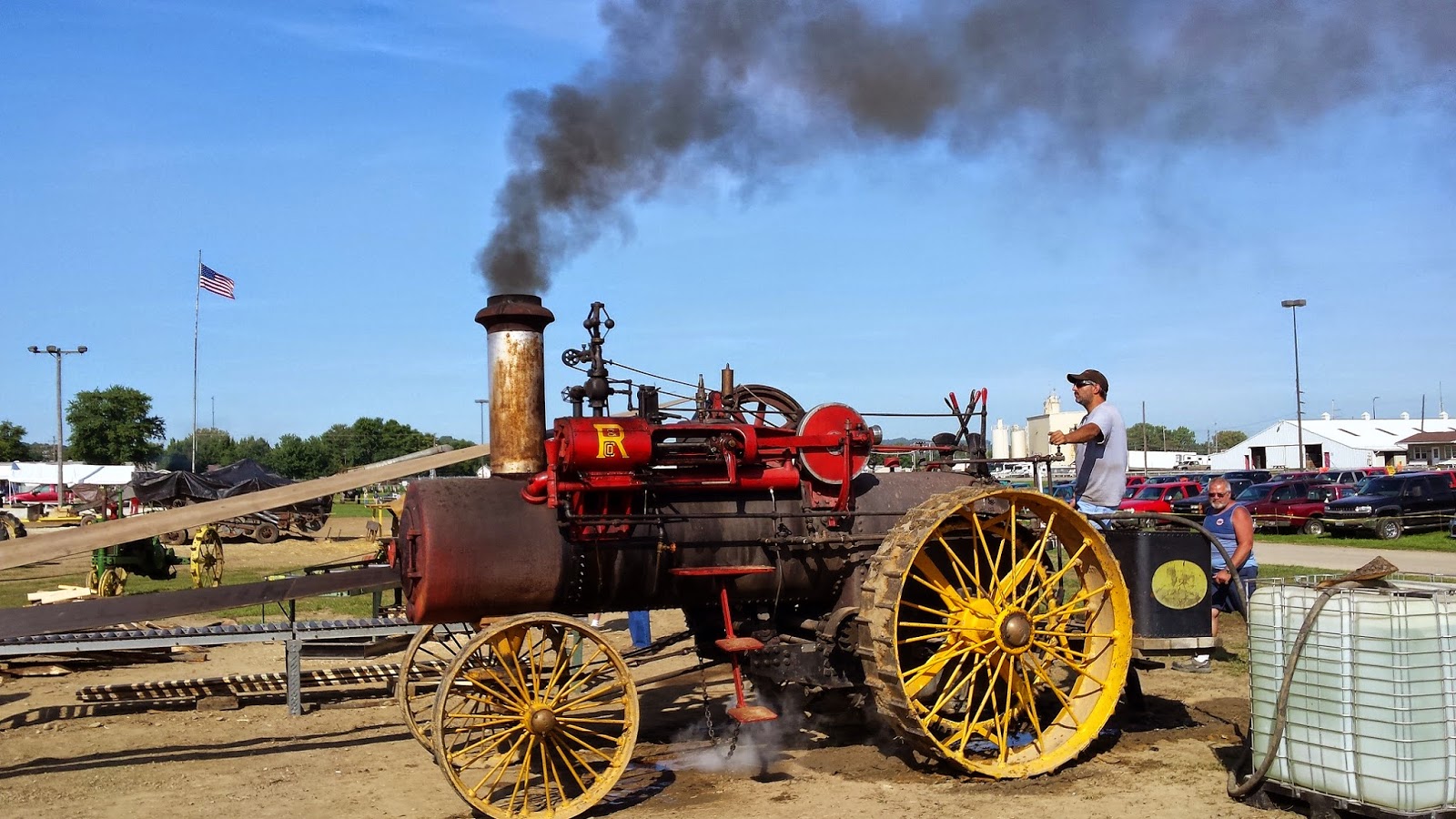 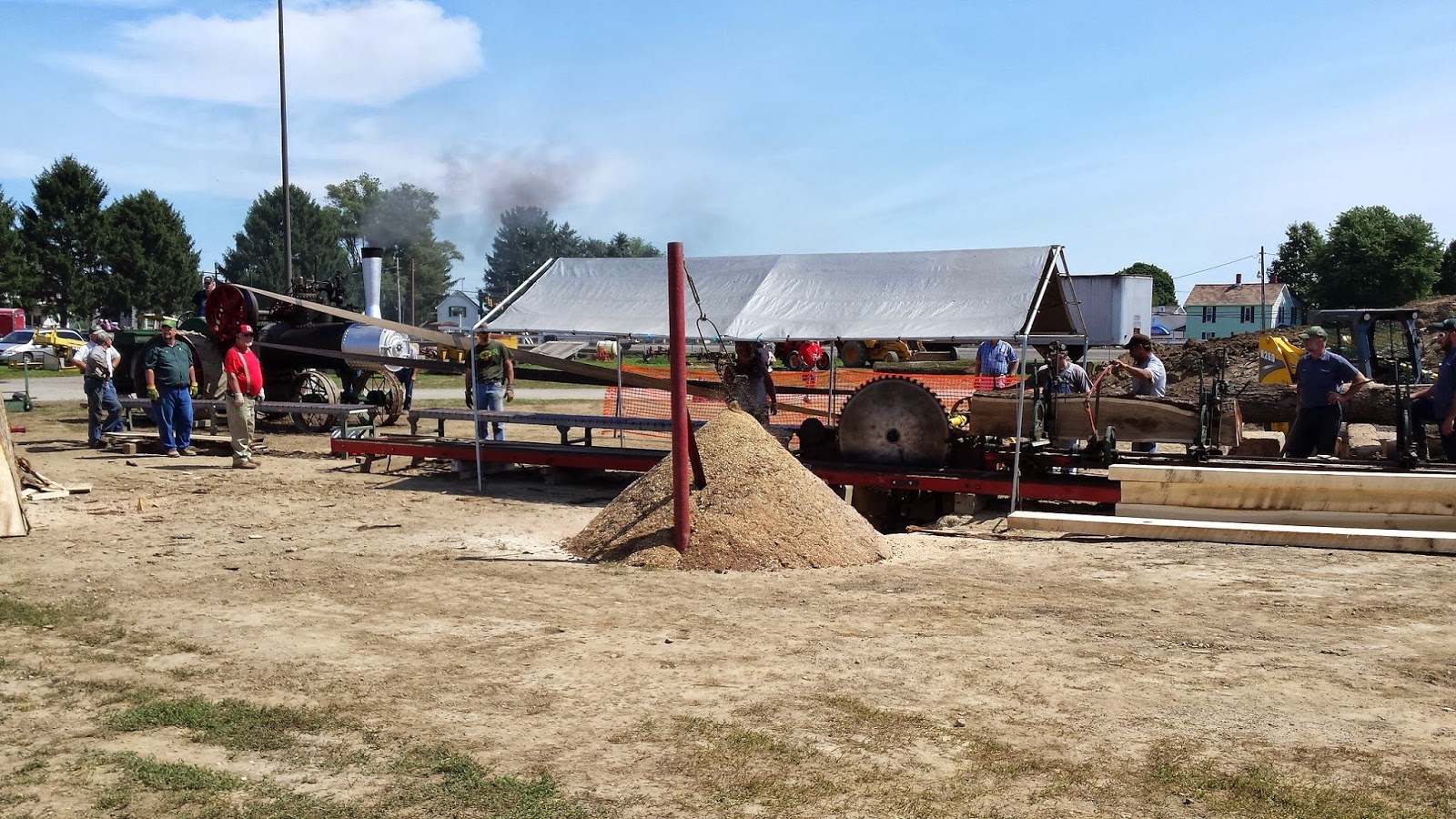 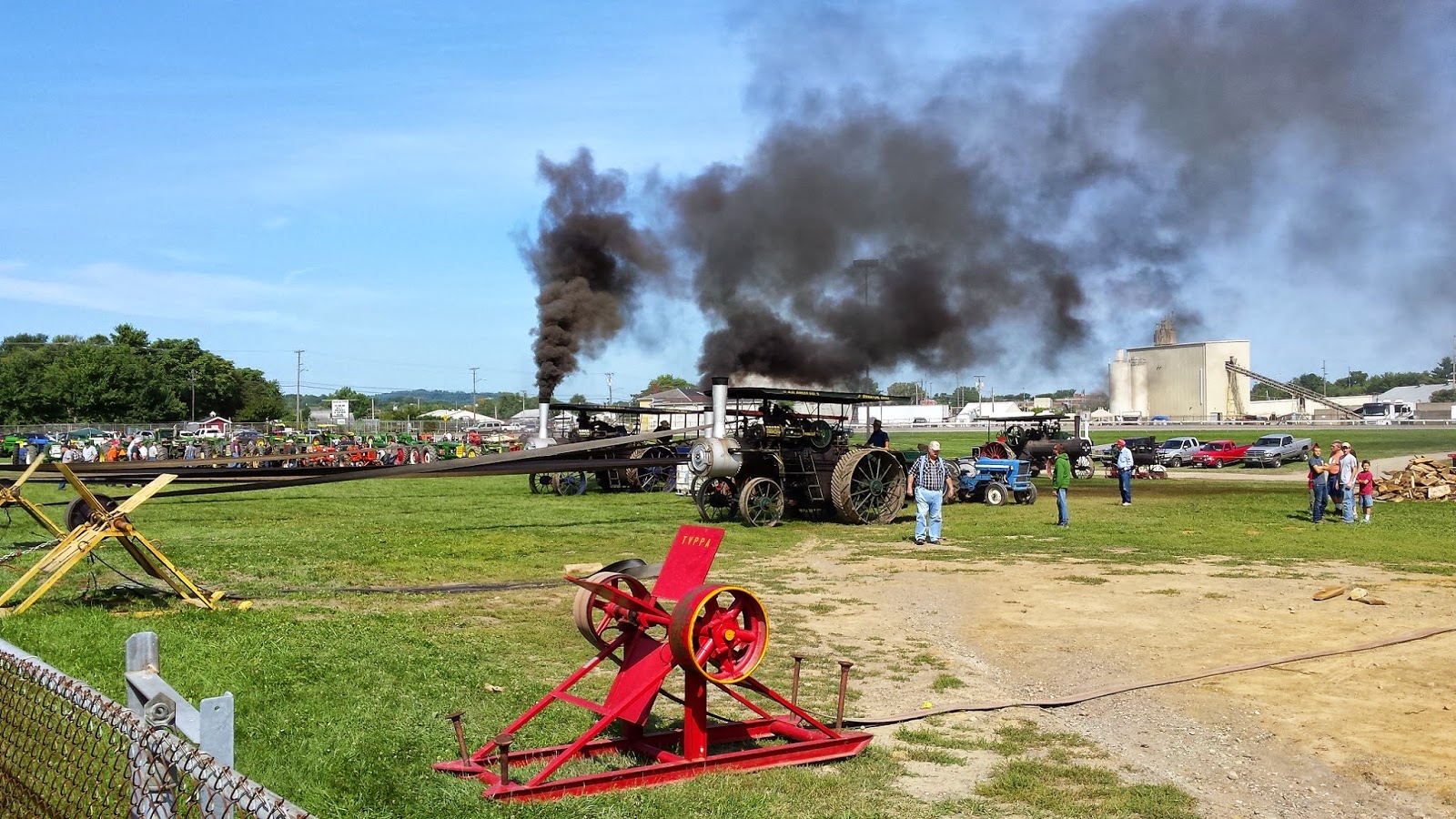 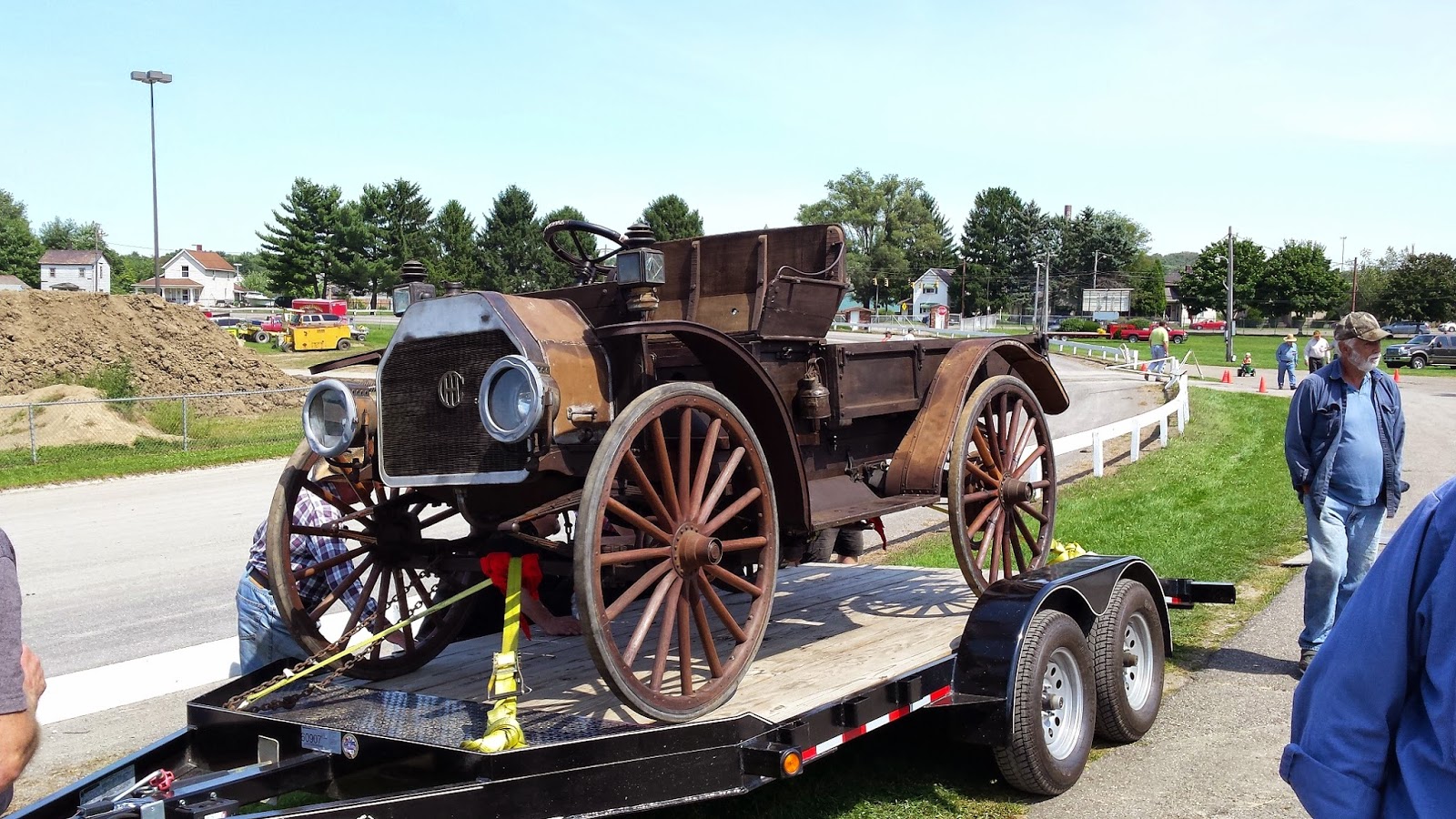 Posted by Dave at Vintage Metalworks at 7:10 AM

Since the '50 Chevy is done and gone, onto the next project...

I had a guy drop off a '56 Chevy Fleetside that had a tremendous oil leak out of the rear of the engine.  The engine was supposedly rebuilt and didn't have much actual run time on it.  It only leaked while it was running and the oil appeared to be dripping off of the main bearing cap.  Since the engine had been apart before, I suspected that the rear main seal was the culprit.  The Chevy 235 family of engines use a two piece rope seal for the rear main.  The aftermarket does supply a neoprene replacement but results seem to be mixed on the longevity and effectiveness of it. So, I ordered a replacement rope seal and a pan gasket from Patrick's who sell Best Gaskets...might be little ostentatious in their name, but the are actually surprisingly good quality and I highly recommend them. 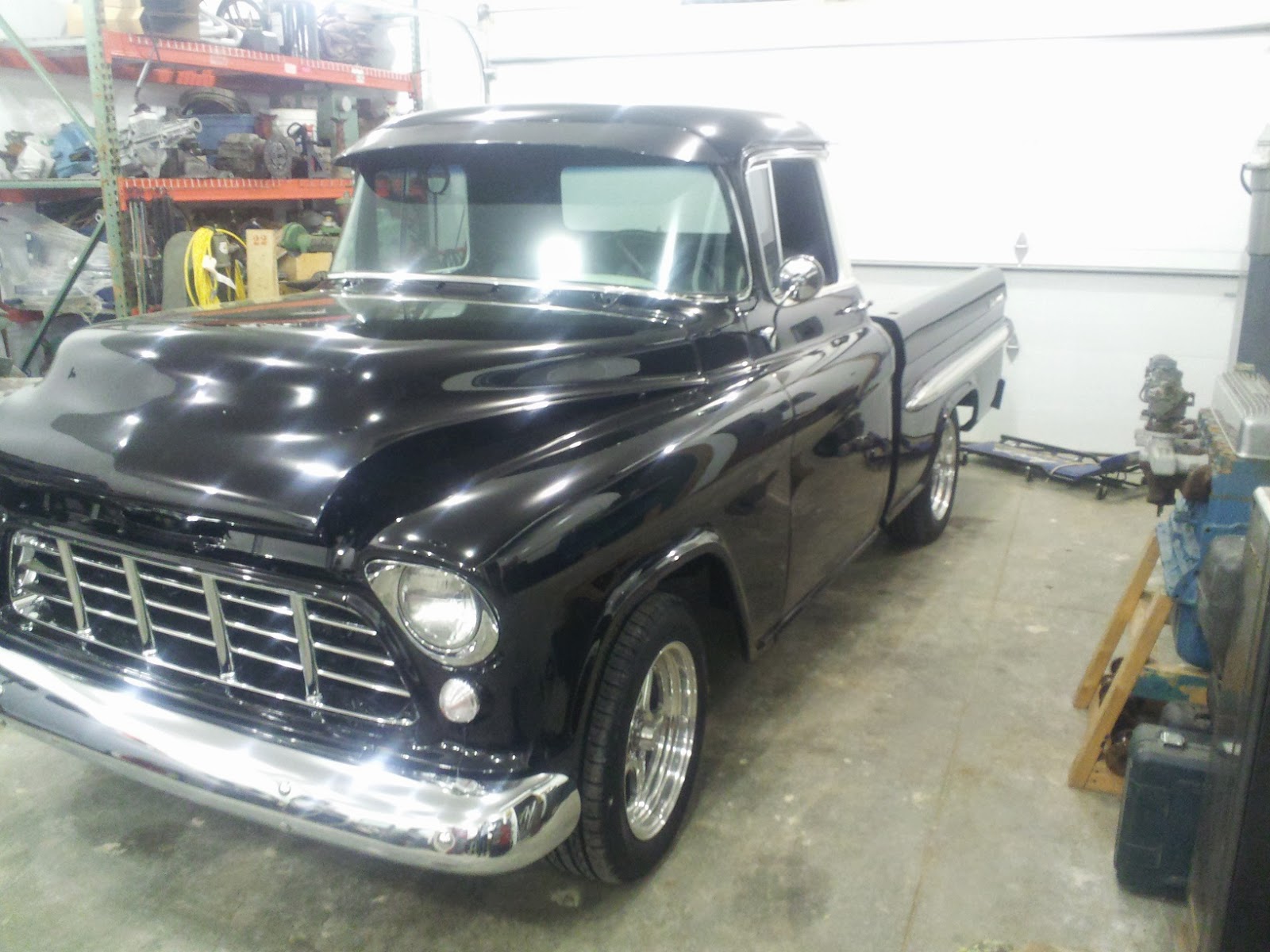 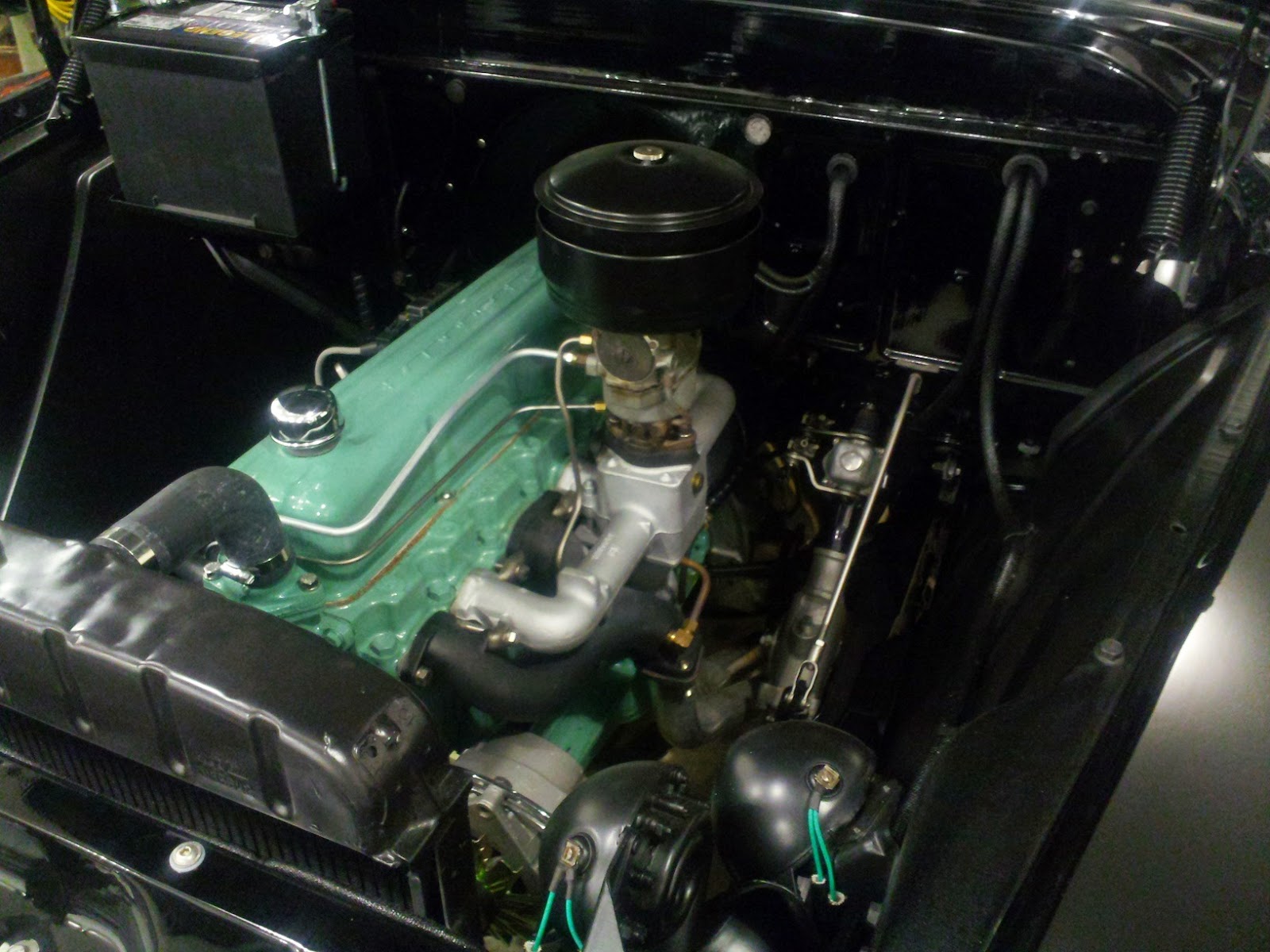 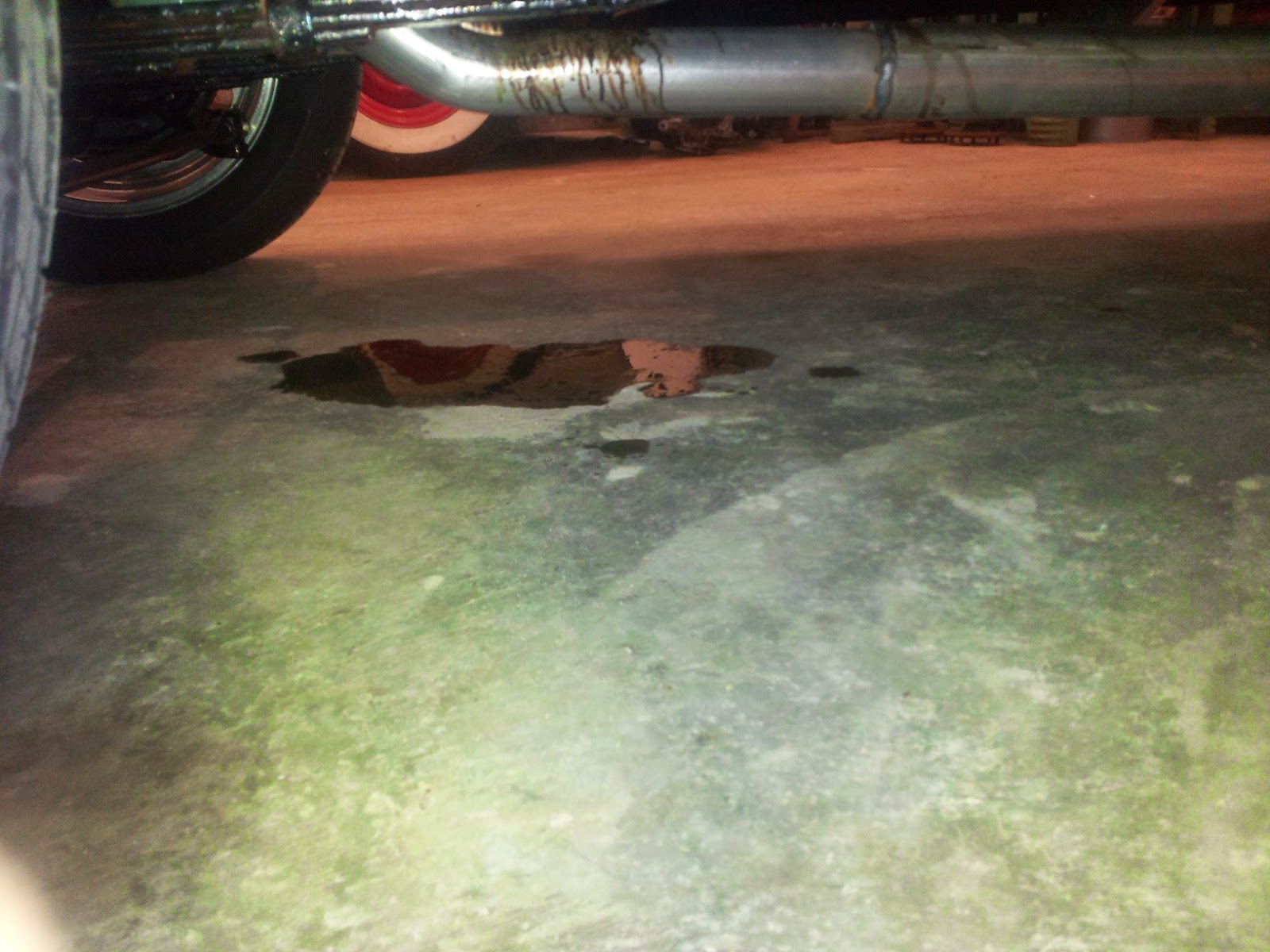 So as you can see in the above picture, there was quite the oil leak.  In order to change a rear main seal in a 235, the crank main caps have to be loosened and the rear of the crank lowered about an 1".  The front is held in place by the cam gear and the front seal so you need to take care not to damage those.  In order to drop the crank, the transmission, clutch and flywheel all have to come out.  What's nice about the 235 is that the rear engine mounts are on the bellhousing so there is no need to have to support the engine. 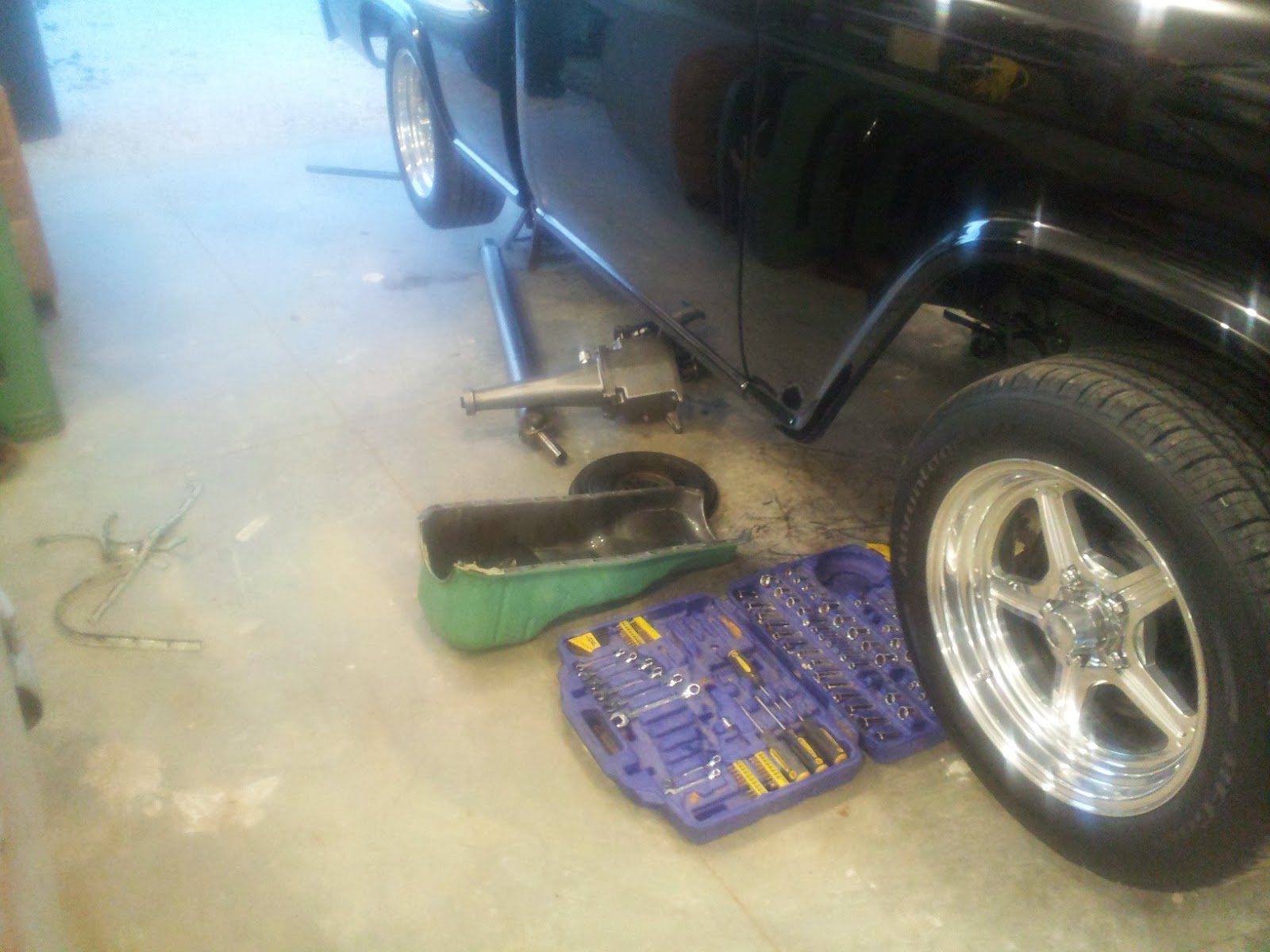 Once the rear main cap is off, you can get your first glimpse of the seal.  Once it was apart, there really didn't look anything noticeably wrong...at least wrong enough to allow that much oil to leak out.  By design, the rear seal doesn't have hardly any pressure on it.  You might notice the large cavity between the main bearing and the seal.  This is an oil drain to allow the oil to drain back to the pan and not come in contact with the seal.  This cavity extends down into the main cap and there is a large hole to allow it to flow back to the pan. 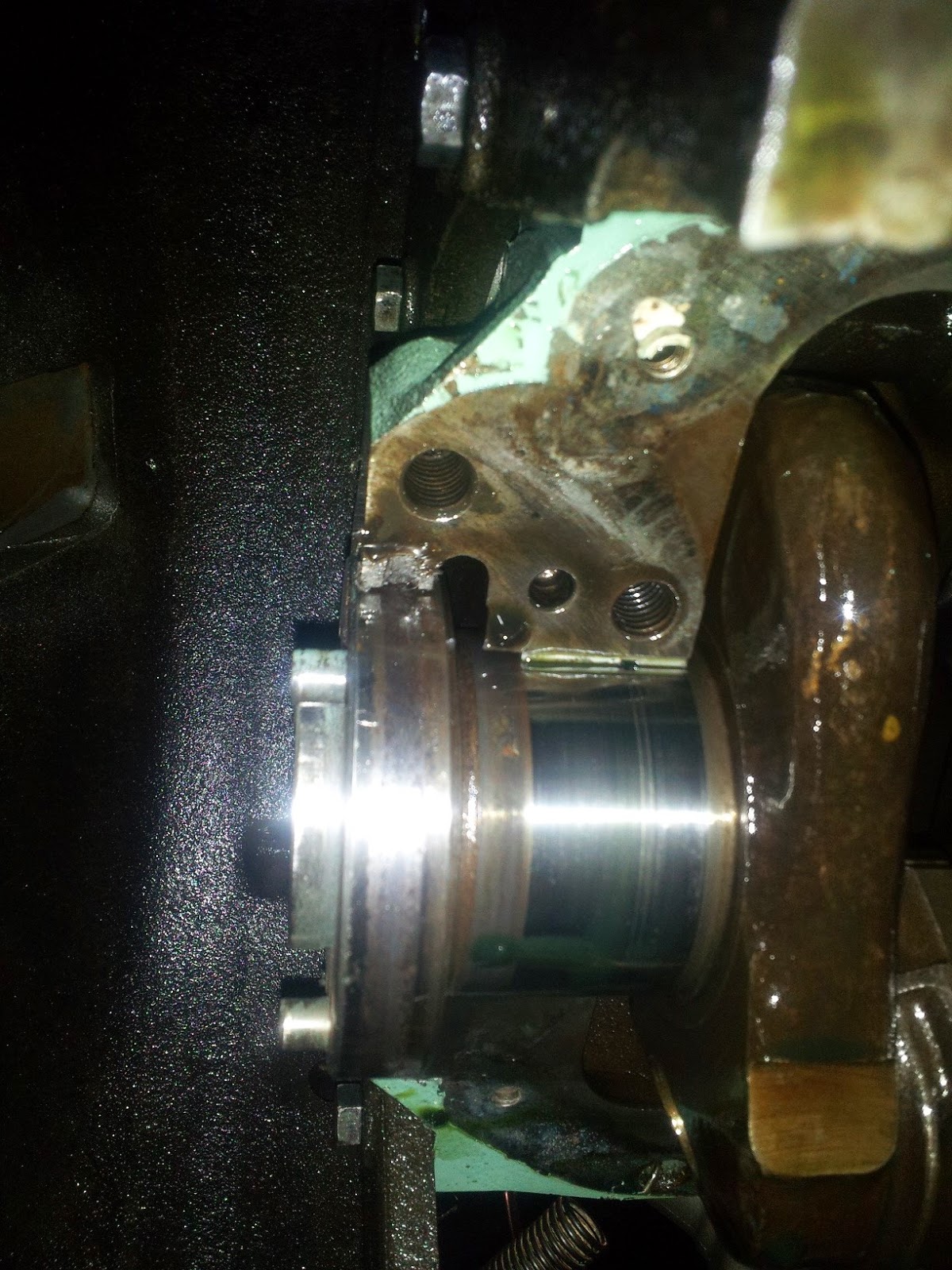 So, since I had it this far apart, I installed the new seal and trimmed it to length per the instructions.  The mains were torqued down to spec and pan put back on.  A little advice when it comes to pan gaskets on 235's, glue the gaskets to block and not to the pan.  It makes it go a heck of a lot easier...

After everything was buttoned back up, I took it out for a test drive....and....it made absolutely no difference!  It still was an oil leaking pig.  Since everything was cleaned prior to being put back together, it was quite easy o spot exactly where the oil was coming from.  It wasn't from the seal, it was running down the back of the block onto the seal area.  The only place where it could be leaking on the back of the block was from could be the freeze plug for the camshaft bore.  So...once again...apart it came....but this time, the bellhousing had to come off.

Once the bellhousing was off, you could see about a 1-1/2" long crack in the freeze plug where it appeared that a previous owner had pried there for what I assume was to remove a previous bellhousing.  Luckily Napa had one in stock and after a few more hours of putting it all back together, out for another test drive.  This time, however, it was dry as a bone!

Posted by Dave at Vintage Metalworks at 7:41 AM