Well...it runs!  I have been messing around with the Ninja the last couple of evenings and finally got it to run.  There are still some minor issues to work out, but at least it's got some potential.... 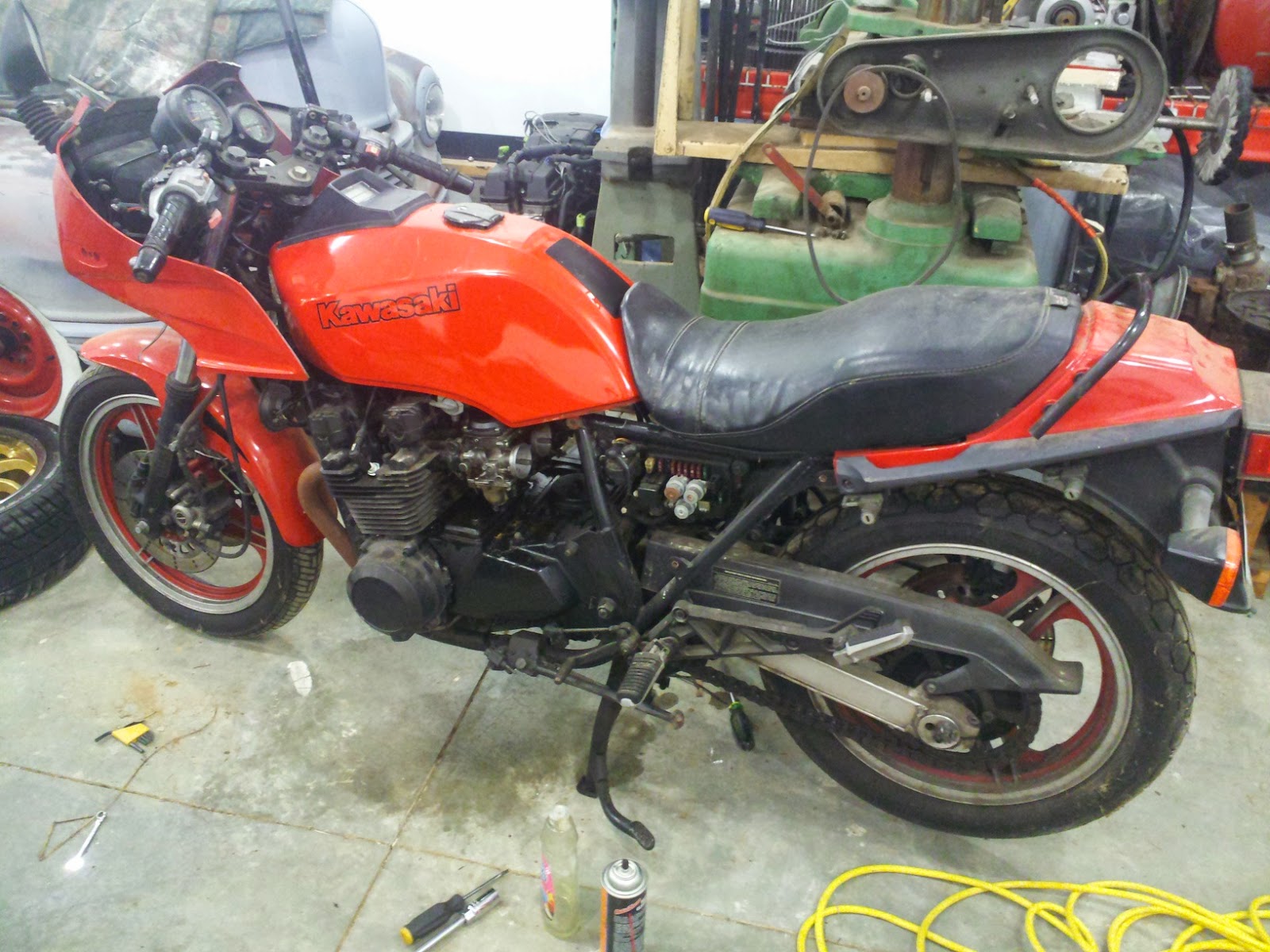 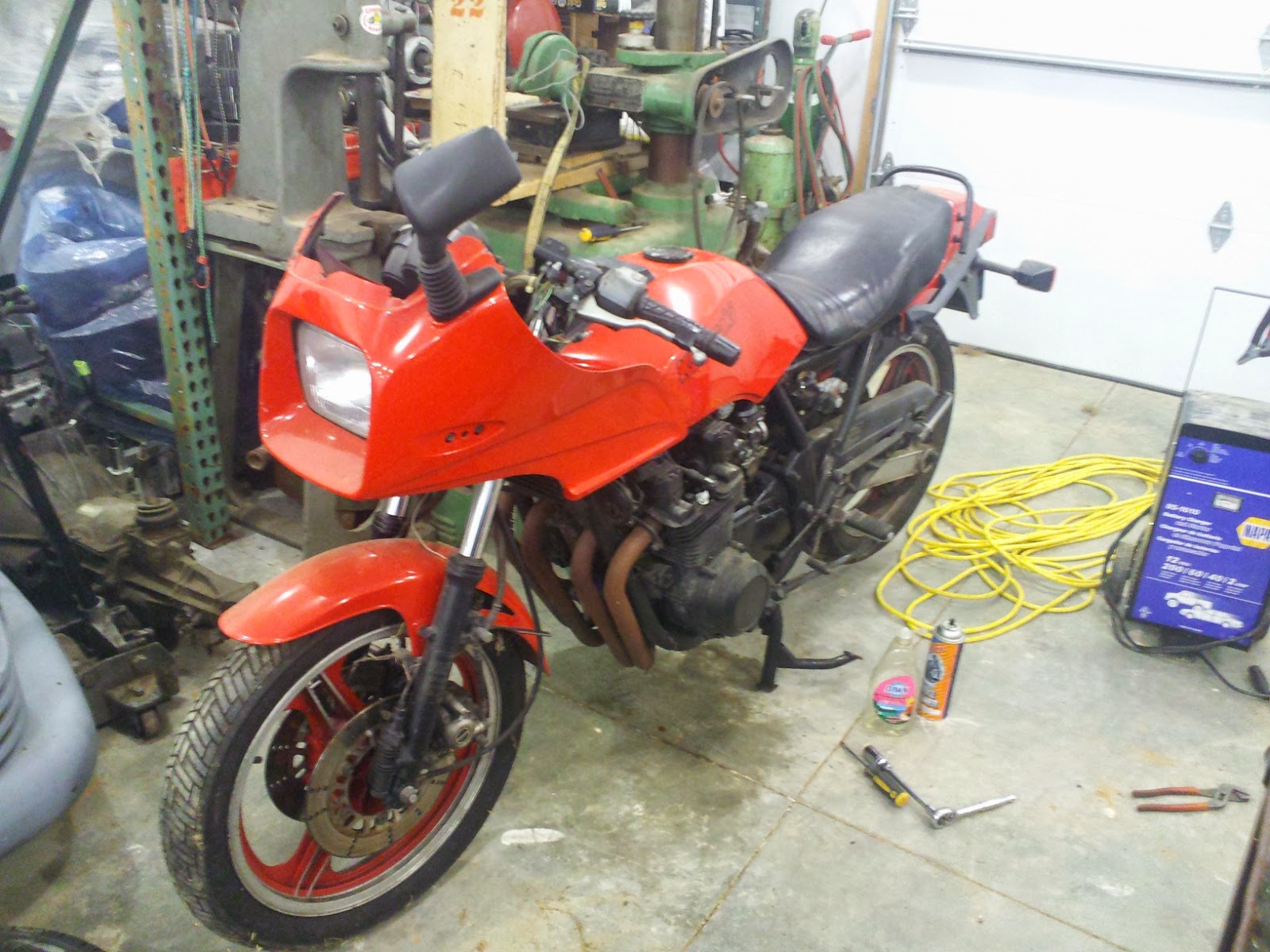 I was able to snag some wheels and tires off of Craigslist for the Volvo project recently. They turned out to be 17x7" DR9 Drag Wheels with almost new 245/45R17 Potenza's.  But of course, they didn't fit.  I actually did know this when I bought them....so back off.

Because the Volvo is...well....Volvo, it has a 5 on 4-1/4" bolt pattern.  Who uses a 5 on 4-1/4" bolt pattern?  Really?  Apparently, old,old Mopar and Puegeot.  Good luck finding custom Peugeot wheels in the U.S.  Trust me, I tried.  The only custom wheels offered for Volvo's are either genuine Volvo wheels or knockoffs of genuine Volvo wheels.  That doesn't leave to much for variety and partly the reason all lowered 240's have the same style wheels.

The plan is to make a much more common wheel fit, say a 5 on 4-1/2" bolt pattern.  I am eventually going to swap the rear end for a 9" to handle the power of the 2JZ, so it seemed natural to use a Ford pattern.  The front hubs can be re-drilled for the pattern as well.  However, until that point, I am just going to run some adapters that I got off of everyone's favorite internet auction site.  For a little under $90, it seemed like a good way to tell if everything was going to work or had the possibility of working. 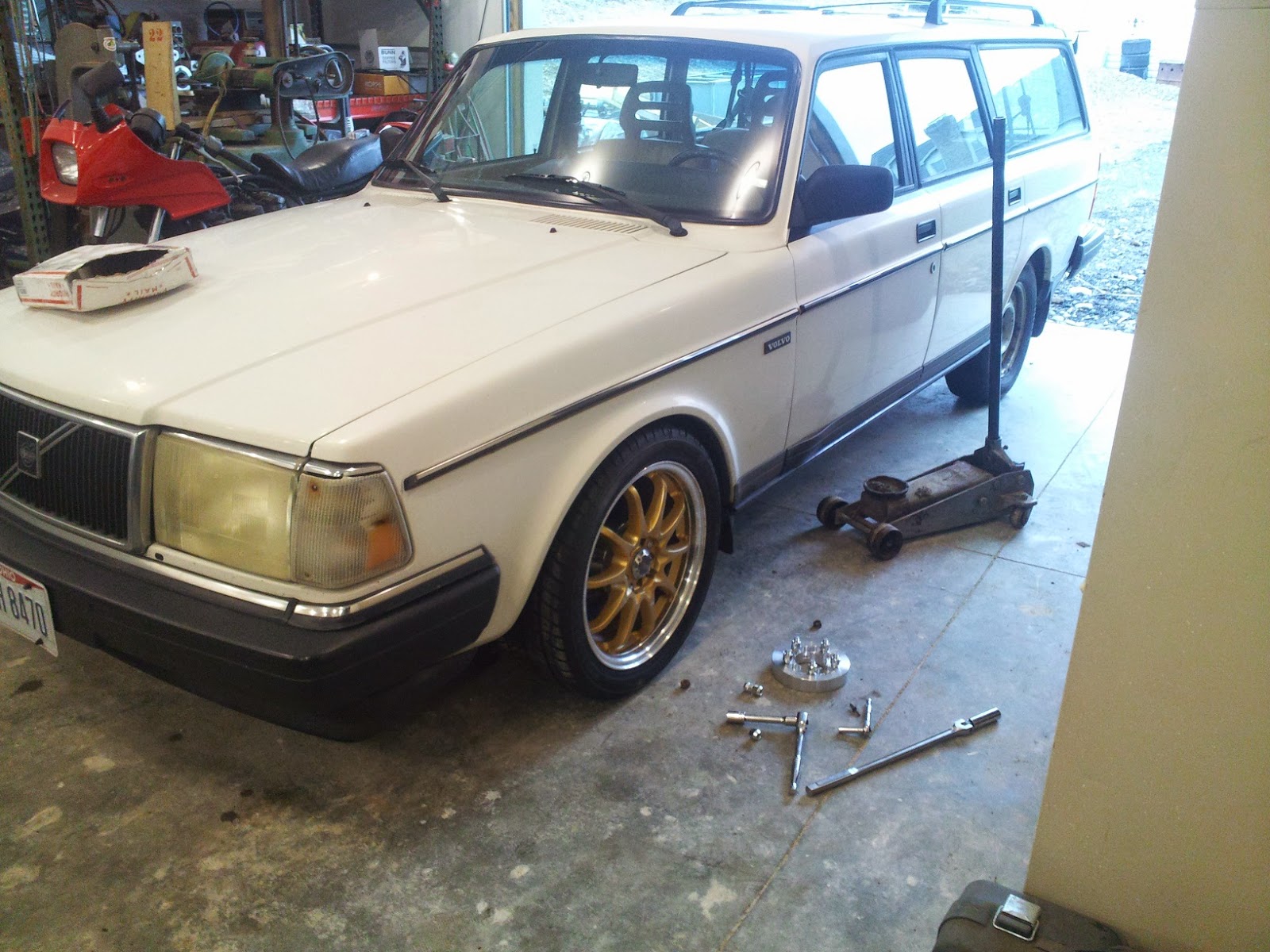 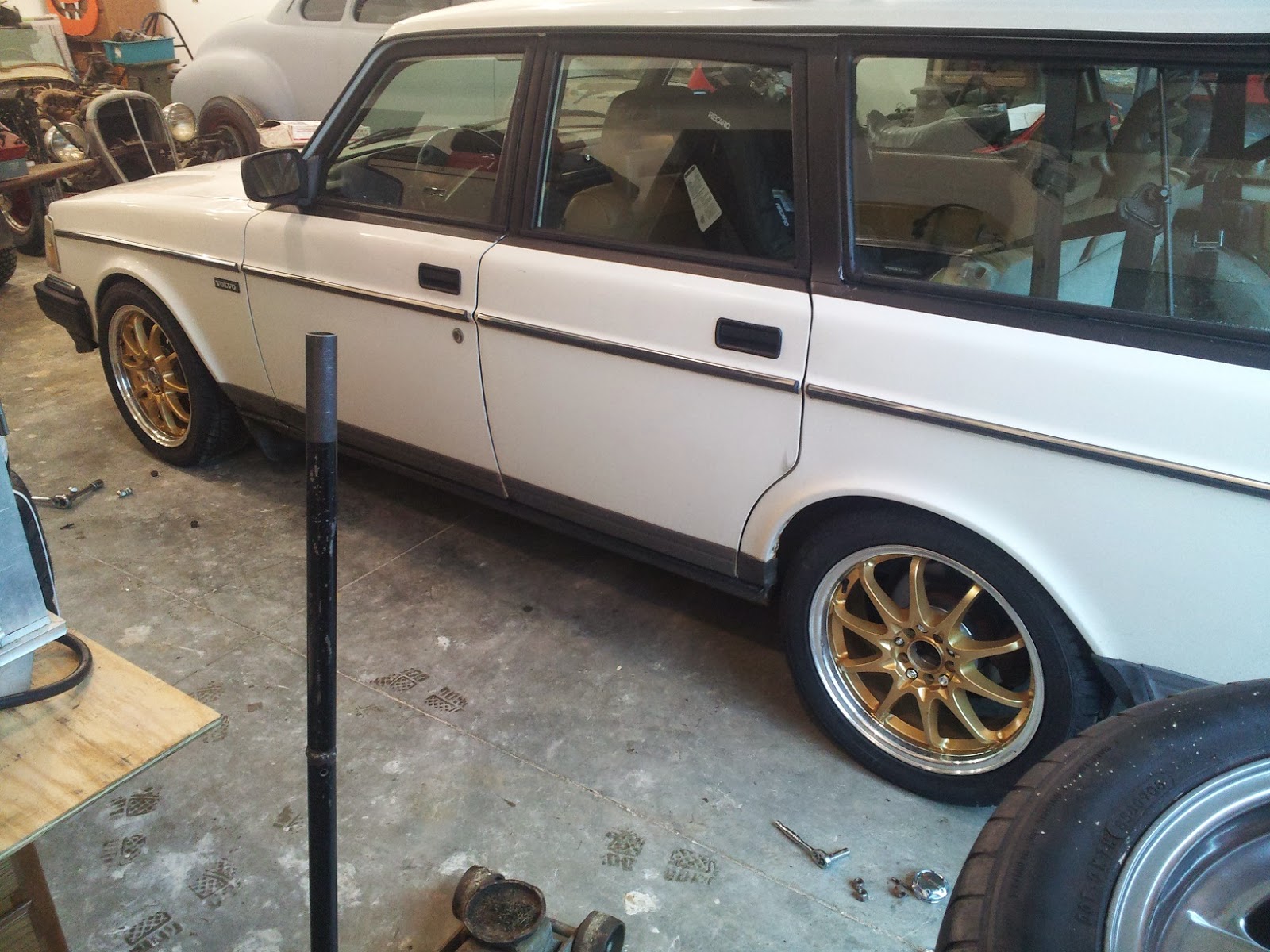 Posted by Dave at Vintage Metalworks at 7:12 AM

After several months of development, it's finally here.  Adapt a GM T5 to your factory 218/230 Mopar passenger bellhousing. 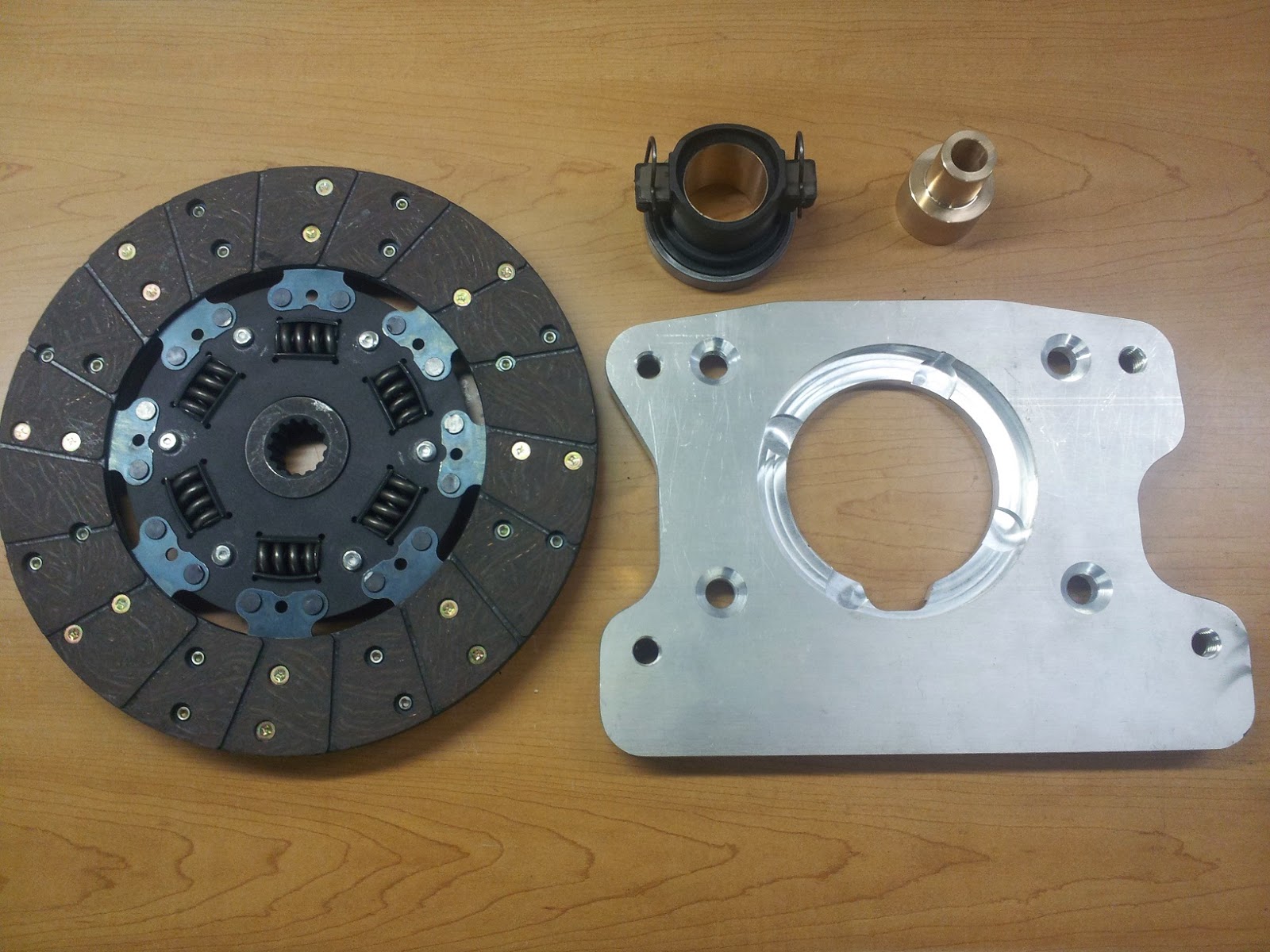 Due to the length of the original Mopar 3 speed input shaft, there were some challenges developing this kit.  First off, the clutch disk had to be custom assembled to offset the input hub toward the transmission.  It's built from all new common aftermarket components easily assembled by any reputable clutch shop.  Secondly, a custom pilot bearing had to be machined that not only accepted the T5's smaller pilot diameter, but also extend it out from the face of the flywheel.  Lastly, the clutch release bearing is a modified newer Dodge replacement part that has a sleeve pressed in the ID to properly align on the T5's bearing retainer.


Even though we are still finalizing the kit before it is officially available, it's going to include the following:


This kit will require drilling the mounting holes of the the transmission out to 1/2" diameter from the factory 12.5mm.  Also, depending on the rear engine mount mounts, there might be some interference between the adapter plate and the mounts themselves.  A small amount of grinding on the mounts might be required.

As always, if you have any questions, please feel free to call or email.
Posted by Dave at Vintage Metalworks at 7:40 AM

As we are getting closer to finishing the Willy's up, we still had a couple of small items to address.  One of those being a trailer hitch.  As with everything on this car, it proved to be difficult and fought us the entire way.  Everything interfered and there was nothing to bolt it to.  For a car this large, you would think that there would be plenty of room....

We started with a random Reese hitch from Summit Racing's bargain table.  I had not idea what it fit but it looked like it was easily adaptable.  The best place to bolt it to is obviously the frame, so we came up with some offset brackets to accomplish this.  The biggest huddle was working around the gas tank.  Its so tight against the frame that you cannot get the hitch bolts in with the tank installed.  So, this means that the tank has to be installed after the hitch.

Overall, I don't think it didn't turned out too bad and its plenty strong enough to handle what ever the customer feels like dragging around... 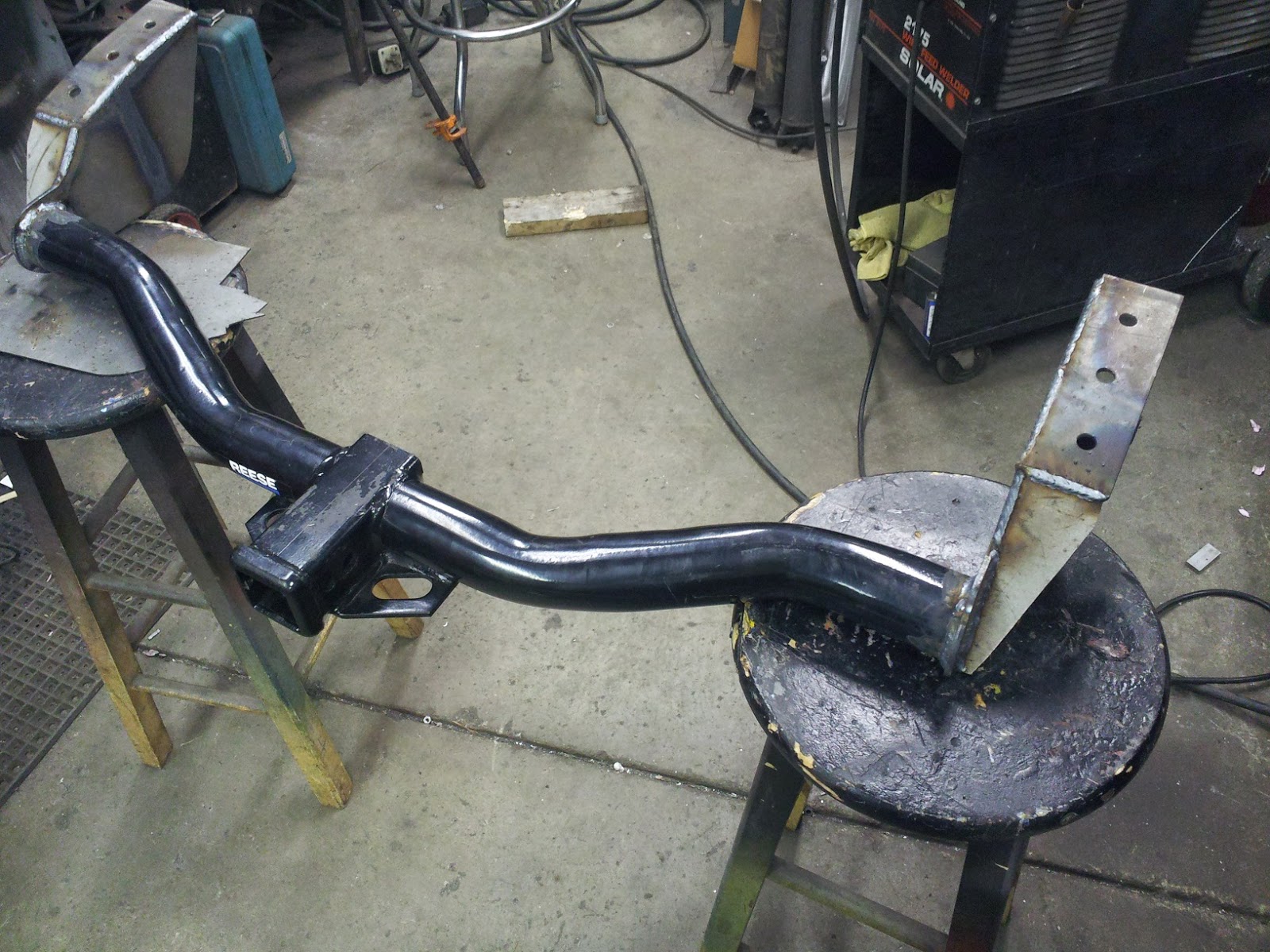 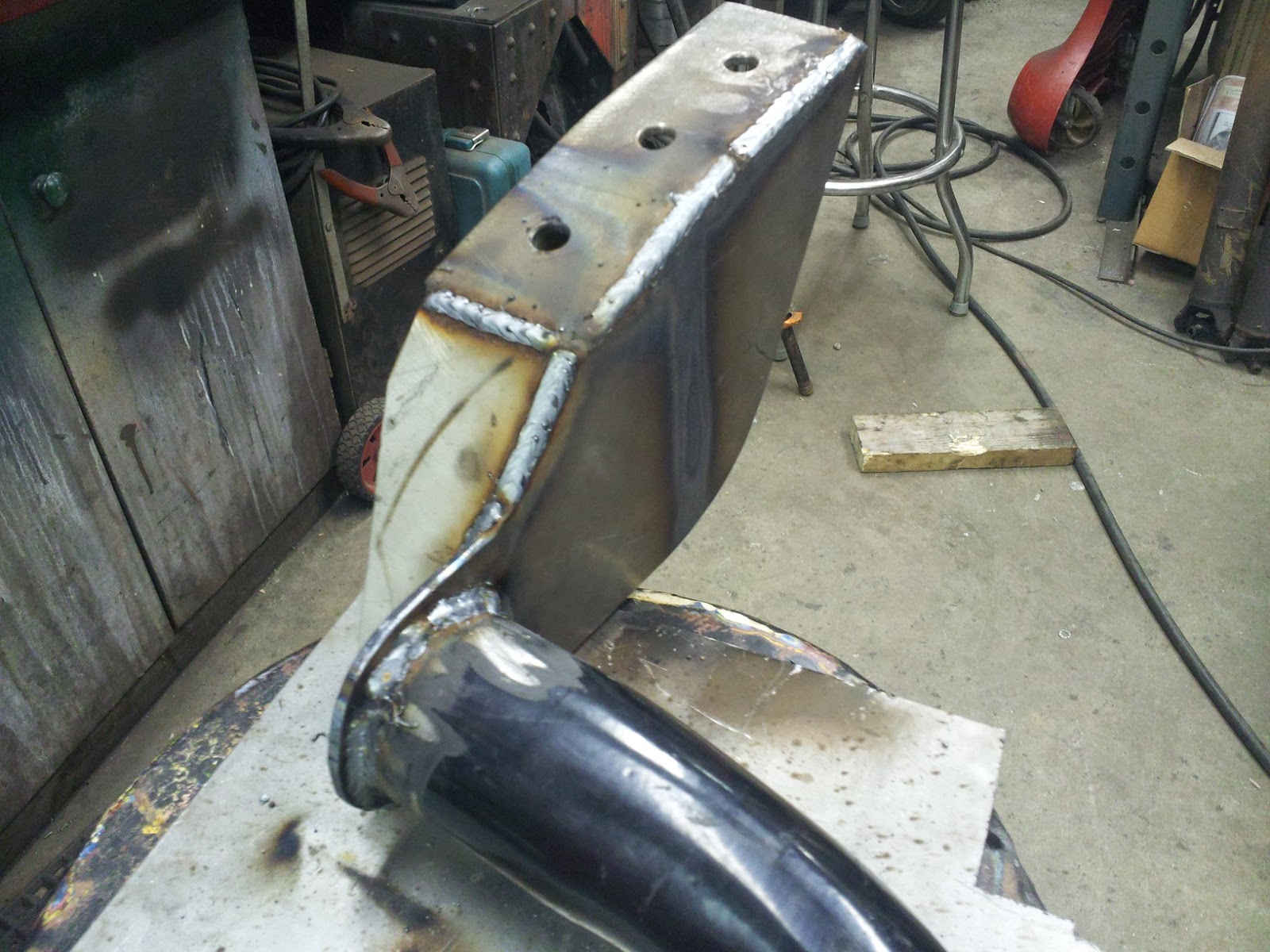 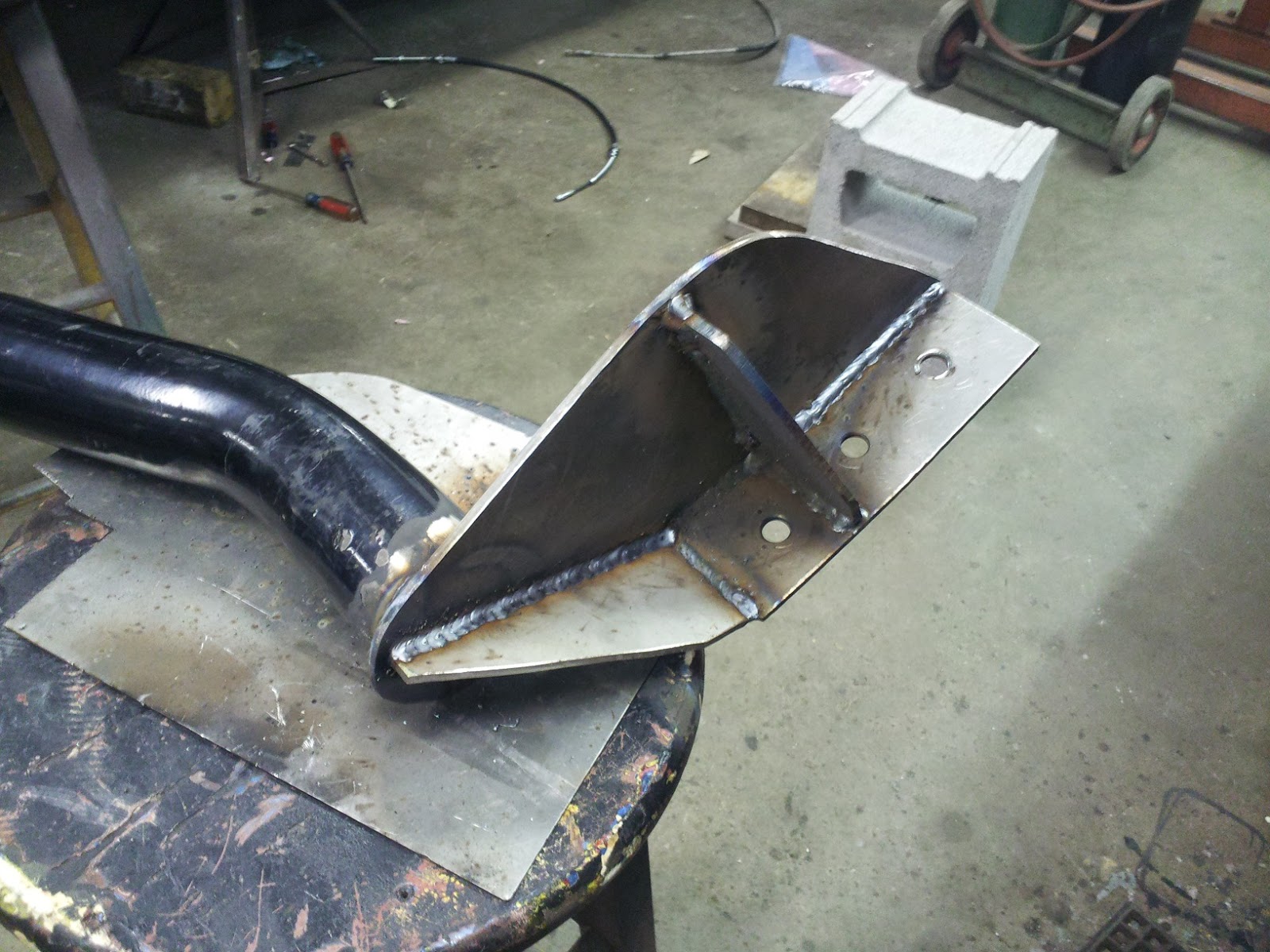 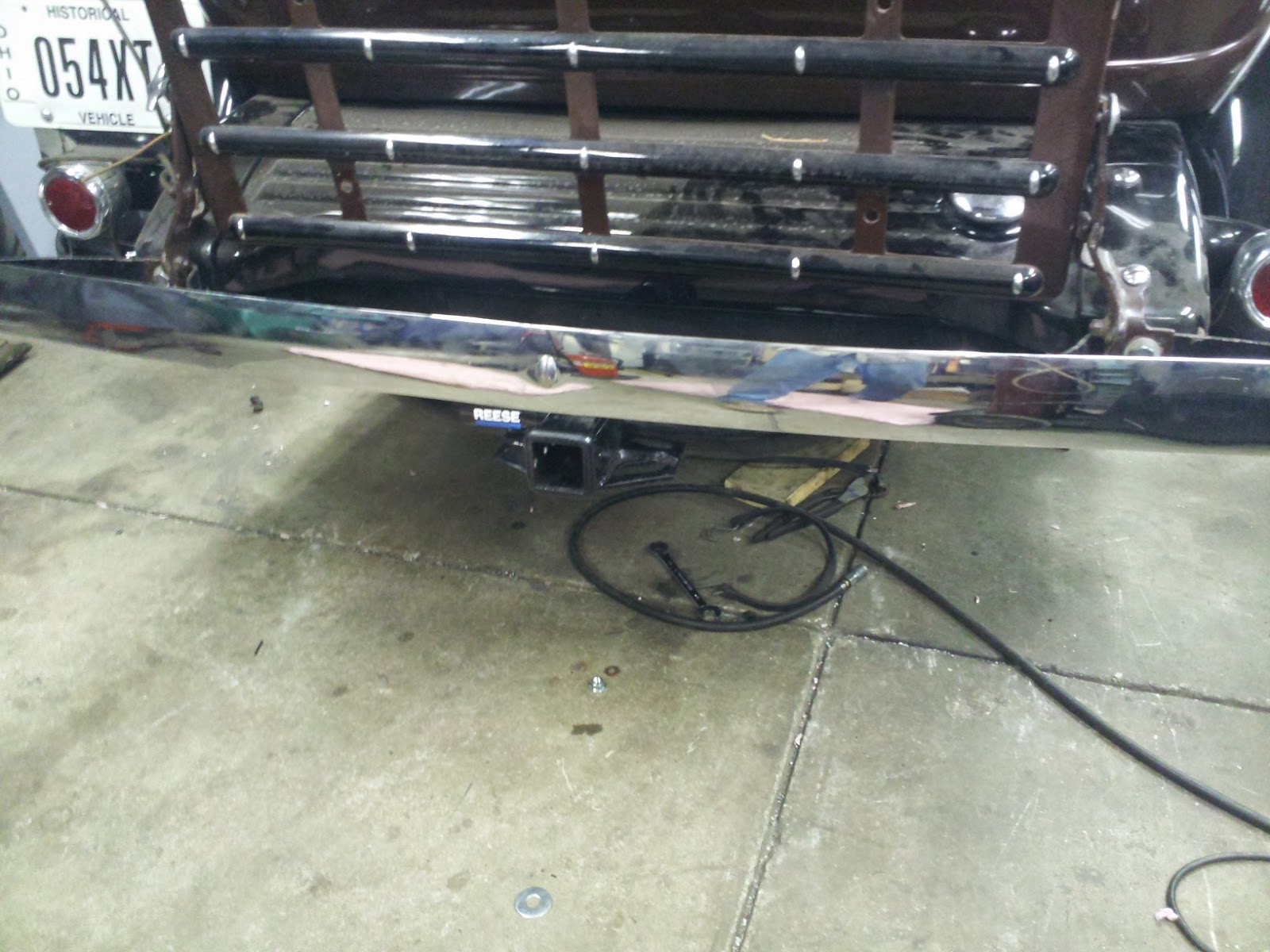 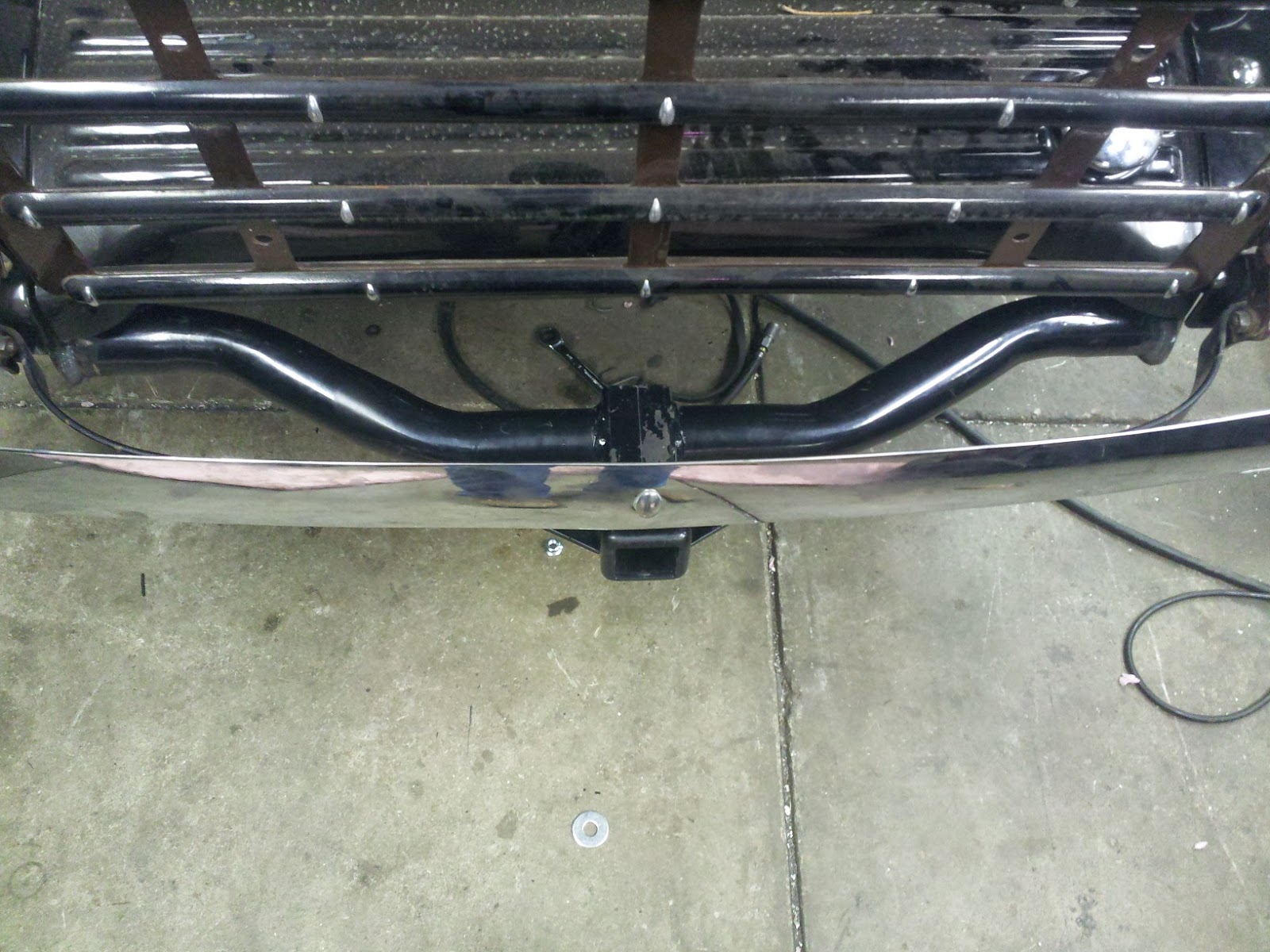 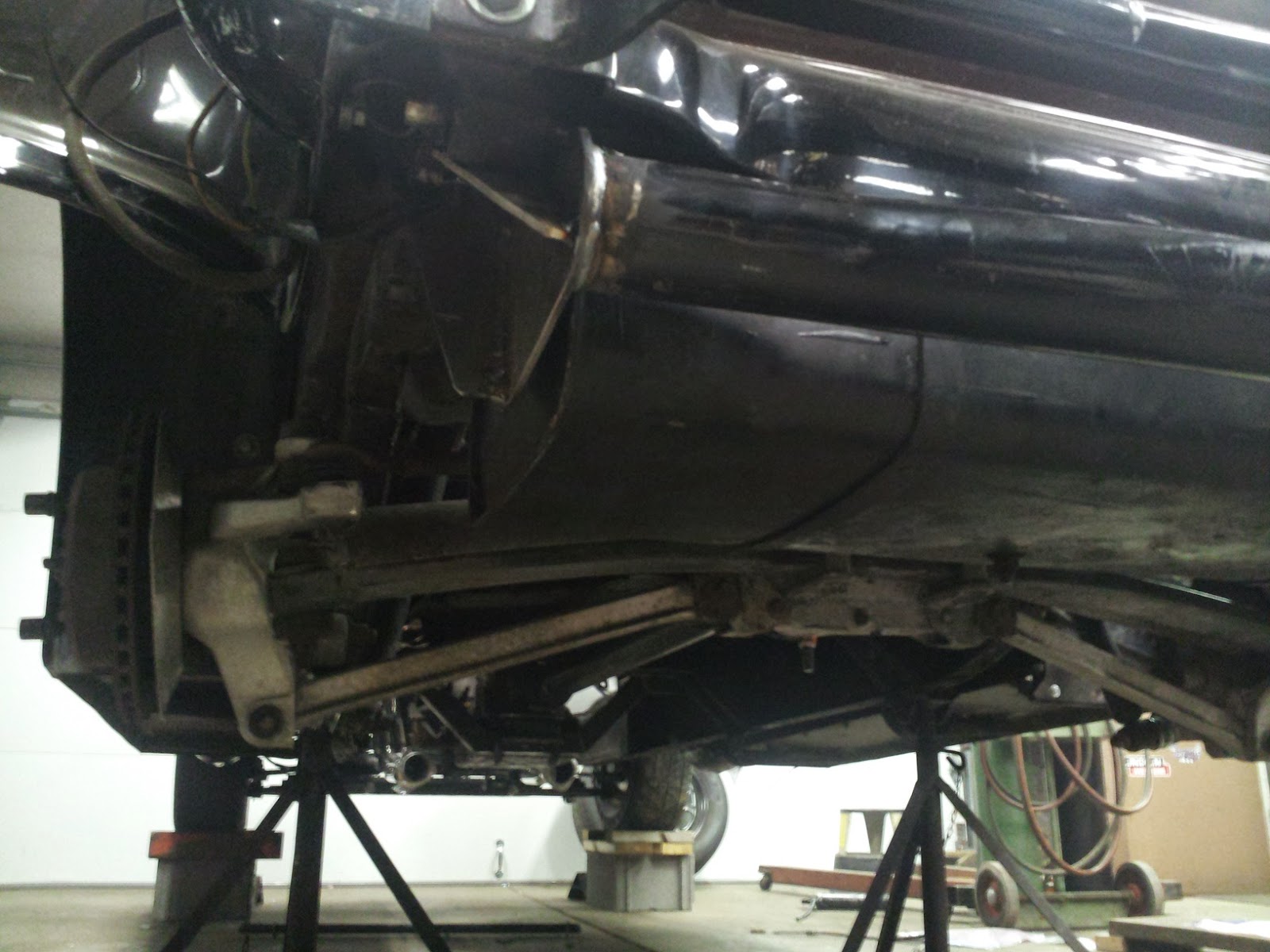