I've had several inquires about making an adapter for a pre-1948 Chevy truck bellhousing.  Mainly found on 216's from 1937 all the way up to 1947, this bellhousing has what I like to call the medium size bolt pattern.  Bigger than the '49-'54 car pattern but smaller than the later 235 bellhousings, the bottom two mounting holes measure 7.25" across.  On the earlier trucks, the pedals are mounted directly to the bellhousing making the swap to a later bell just that much more difficult. 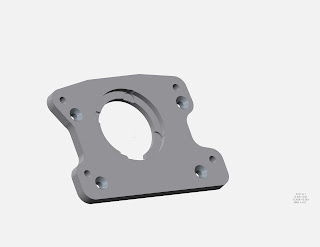 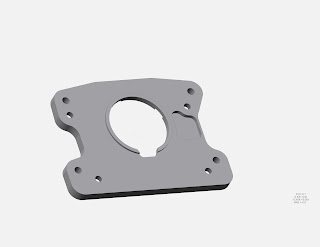 You can see in the picture below the three bolt boss that sticks out on the driver's side for the pedal mounts.  Every bellhousing pre-1947 that I have seen has had this mount.  However some where not drilled and tapped which I believe are post war since the AD trucks had the pedals mounted to the frame. 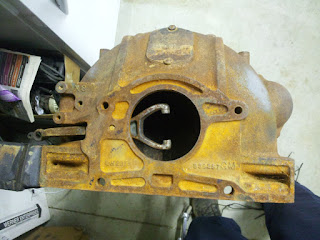 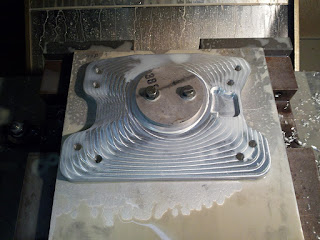 The pocket that is machined on the right side is for an adjustable clutch pivot ball that is in a customer's '37 Chevy truck.  We believe the bellhousing is original to the truck, but someone has been in there before.  regardless, it was no big deal to machine it in.

These new adapters should be done within the next couple of days.  Shoot me an email or give me a call if you need one.
Posted by Dave at Vintage Metalworks at 7:34 AM 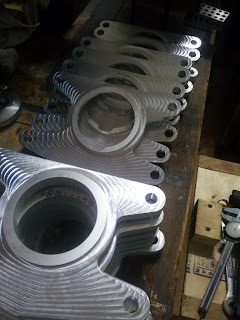 Posted by Dave at Vintage Metalworks at 7:41 AM

So, a friend of mine sent me a post on Craigslist for a "1950's Chevy 6 CYL - Dual Exhaust".  Needless to say, it peeked my interest, especially after I noticed the "GM" on the factory looking dual exhaust manifold.  I called and went to go take a look.  The guy said he bought then engine 15 years ago and had no idea what it came out of.  He alluded to the fact that it might be a Corvette motor.

Upon some investigation, the casting date was '54.  It have an earlier 216 bellhousing, a single carb intake  and was missing the distributor.  The early 'Vette 235's had dual points so it might be possible that someone took the distributor as I would think they are fairly rare, even more so than the exhaust manifold.  The casting numbers were 3835911 on the block and 3835913 on the head, which according to some sources are correct casting numbers for 'Vettes.  However, for as many sources that say it is, I found the same number that say it isn't.  The engine serial number is 0952I86F54Z.  The F 54 Z code stands for Flint, Michigan, 1954, standard shift engine.  Unfortunately, I believe the Corvette serial would be F54YG.

Regardless, for what he was asking, it was still a good deal....even if it wasn't a 'Vette motor, so of course, I bought it. 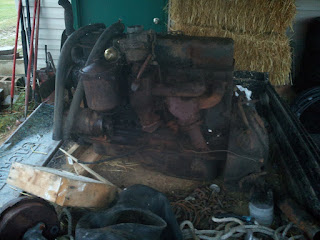 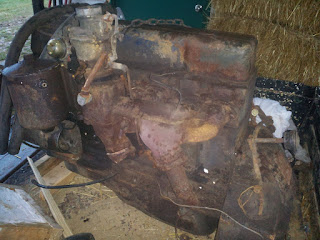 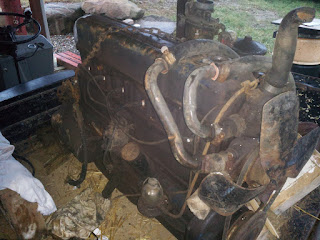 Posted by Dave at Vintage Metalworks at 8:04 AM

I found sometime this weekend to machine another batch of 4 11/16" T5 adapters.  They are back in stock and ready to ship... 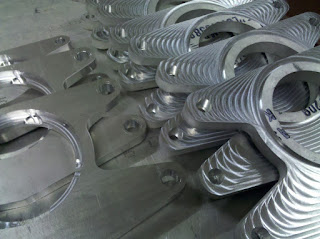 Made some more progress on the new building.  The roof is completely done and the rest of the building is entirely wrapped with Tyvek.  We were able to get the siding starter strip and soffit j-channel on so now the wrap shouldn't blow off...hopefully.  The walk-in door is in and most of the required bracing on the inside is done. I still have to install the hurricane clips on the trusses, then it should be ready for inspection. 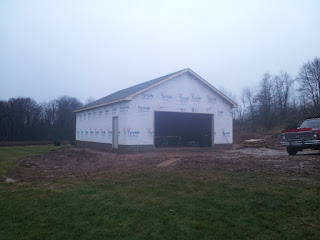 It's been raining quite a bit here lately, so the next big project is going to be gutters...
Posted by Dave at Vintage Metalworks at 7:21 AM

a roof over our heads...and machines...

The building is moving right along.  Last Friday, we set the trusses, sheathed the roof, laid the felt paper and finished the drip edge.  Saturday, we came back and got all of the shingles down.  There are still some little things to do before the framing inspection can be completed, but they shouldn't take too long... 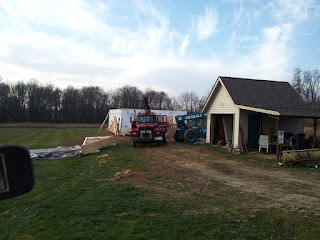 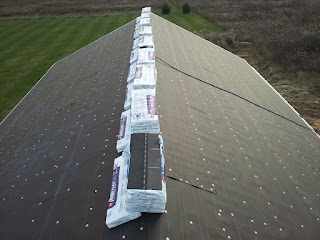 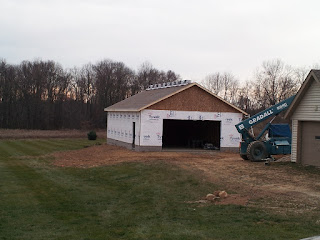