Finally, I am at a point where I can spend sometime on my own projects.  I picked this 240 wagon up about 8 years ago from a really nice old lady.  She made me promise that I would take care of her car when I bought it. 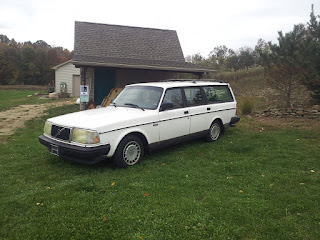 I used it as a daily driver for about 4 years.  It was extremely reliable, a little quirky and was awesome in the snow.  While on my way home one evening it just shut off at a stop light.  After pushing the car into a parking lot, it was found that it had no fuel pressure.  Apparently, the fuel pumps...yes, there are two fuel pumps...are know to go bad.  I initially looked at fixing it but for the price of the fuel pumps and the effort to change then, I bought a 5.3l out of a 2004 Tahoe.  At the time, there were only a couple 240's that had been swapped and it looked like a fairly easy ordeal.

So, out came the original 2.3l and I dove head first into making a fun, reliable, standard shift daily.  Well, after a couple months of working on it, customer's projects kept coming in.  I eventually push it out beside the build and it sat for 3 years.

Before pushing it out, I was able to get the engine bolted in, completely rewire the car, figure out the majority of the hard stuff like accessory drives, exhaust and mount a clutch pedal.  Initially, I wanted to run stock truck manifolds but the flanges interfered with the frame.  At the time, the aftermarket manifolds weren't readily available, so I decided to build some headers. 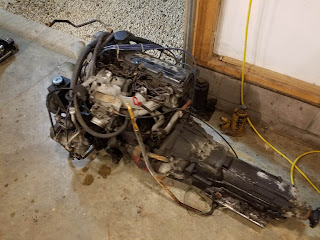 The 5.3l actually fit in the engine bay fairly nicely.  The steering shaft is a bit tight but there is enough room there to make it work. 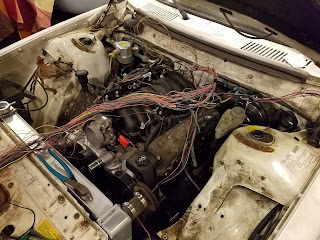 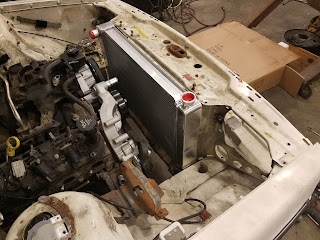 I couldn't find a radiator that fit, so, a little trimming was necessary.  The tanks were eventually all welded up and a support placed on the bottom side. 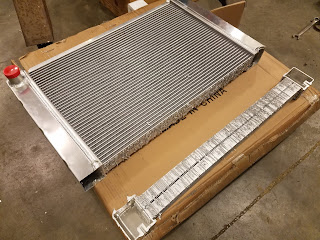 One of the downfalls with Volvo 240's is the wiring.  I did not want any wiring issues so it was completely rewired with a new aftermarket harness.  I did have to purchase the 133page volvo wiring schematic manual to figure out how to get all of the original switch to work with basically a GM aftermarket harness. 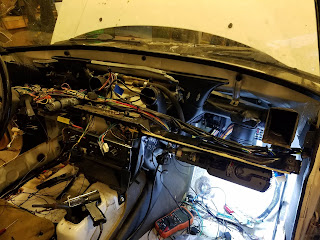 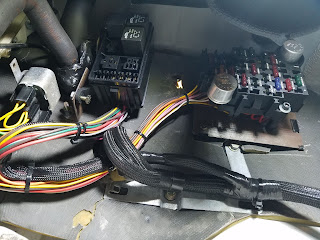 Here it sits after the 3 year hiatus beside the shop 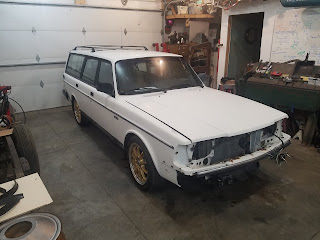 The headers were finished and sent out to be ceramic coated. 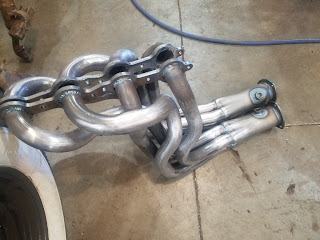 The truck 5.3l pans are extremely deep.  I had to take about 2" out of it to get everything to clear. 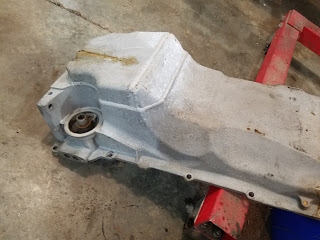 With the engine out, why not add a new cam? 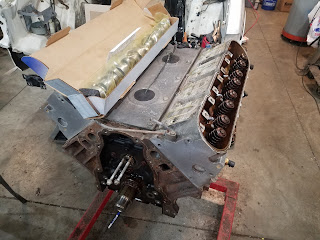 Initially, I am using a T5 out of a V8 Camaro.  Yeah, I know it won't hold up, but I have several and it will at least get the thing on the road.  I will eventually go with a Tremec. 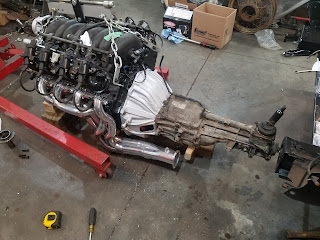 It couldn't have gone in any easier... 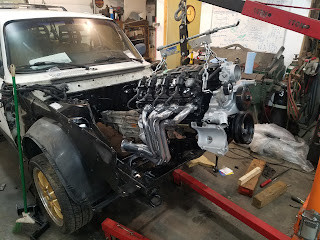 Here it currently stands.  It cranks and has oil pressure.  Onto the fuel system next. 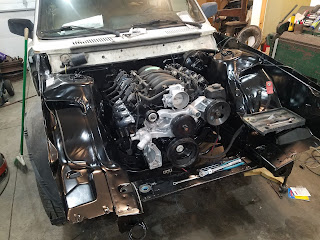 Posted by Dave at Vintage Metalworks at 12:45 PM